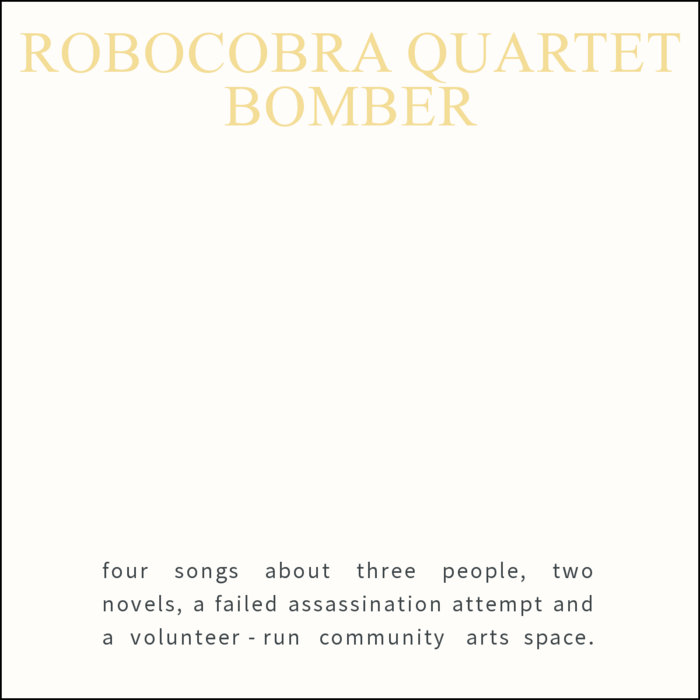 BOMBER features four songs tied together musically and lyrically, based around a fictional character involved in a failed assassination attempt. Inspired by the stories of figures such as John Hinckley Jr. & Samuel Byck, the EP references a number of real-world events, related literature and social phenomena.

"I was listening to a lot of Mountain Goats (front cover is a direct rip off of All Hail West Texas) and decided to group a collection of songs together by a theme/narrative. I found that when you obliquely say that a set of songs are written from a different perspective and not auto-biographical you can actually put more of yourself into it. Weird! This was a real experiment recording-wise - we played together in a circle with a stereo blumlein mic array in the middle. Robocobra in 2014 was really a guinea-pig for me trying new recording ideas; some were successful and some... were not. You can REALLY hear the sound of the snare drum buzzing with the bass on this one. Oops. Some cool songs on this though. First recording with Paul O Reilly on tenor sax - unlike the rest of us he is an actual jazz musician and can PLAY. Also the first appearance of the 'Robocobra Twink Choir' aka Patrick Gardiner and Sean Joseph - they also sing on later records (on the songs You'll Shrug from MFAO and I Shouldn't Have Watched The Film What Lies Beneath When I Was Twelve from PHTG)." - Chris, April 2020

Recorded live by Chris Ryan at Start Together Studios, Belfast
Vocal ensemble on #2 recorded by Patrick Gardiner at Falmouth University